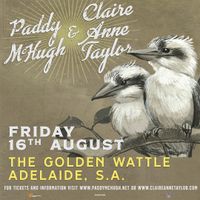 This August and September lauded singer songwriters Claire Anne Taylor & Paddy McHugh team up for the first time to deliver a run of intimate shows in some of their favourite and new haunts, including a special show at The Golden Wattle in Adelaide (SA).

Paddy McHugh is a songwriter who adheres to the time honoured approach of using music to tell a good story. His no nonsense approach to writing and performing has seen him win over audiences, tour the world and share the stage with some of the world’s best local and international acts. Paddy’s latest album ‘City Bound Trains’ was released to critical acclaim and has cemented Paddy’s spot as one of Australia’s most admired songwriters.

Claire Anne Taylor crafts soulful folk songs that are alternatively lush and intimately earthy. Born in Tasmania's ancient Tarkine rainforest, Taylor’s music is reflective of her wild and remote upbringing. With her colossal vocals and powerfully captivating stage presence, her live shows leave the audience in no doubt that they have just witnessed something extraordinary. In January, 2019 Taylor released her second studio album, titled 'All The Words'. A rich, soulful masterpiece from the Tasmanian songstress, 'All The Words' was recorded in a wooden cabin in Tasmania's Huon Valley, by esteemed producer Chris Townend (Portishead, Silverchair, Tim Finn, Ngaiire).